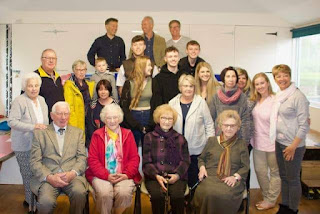 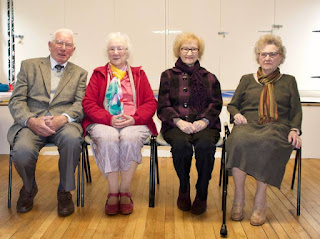 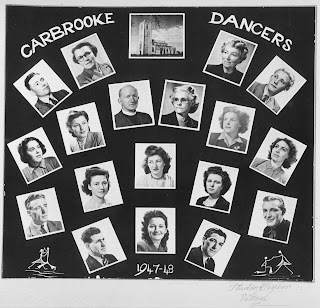 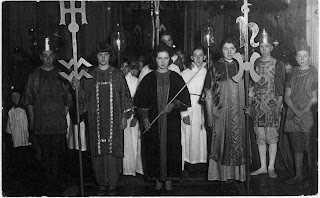 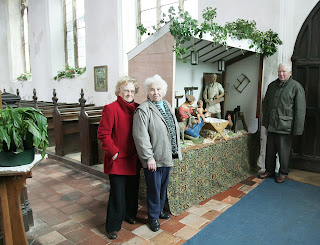 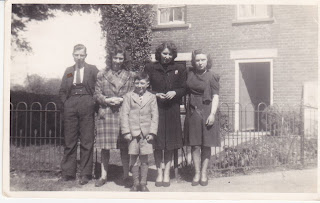 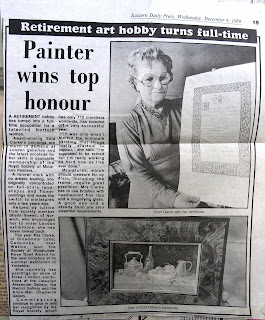 Enid moved to Carbrooke at the age of 3 months , with her parents Cecil and Winifred in 1920. The family ran the village shop in Church street, before moving to 'Striped Cottage' in Broadmoor Road, and later to 'The Post Office' on Shipdham Lane, where they ran the Post Office until 1980's.Enid reached the amazing milestone of 100 years, and was Carbrooke's oldest resident. Last April, Carbrooke Heritage Group, were privileged to celebrate with the Smith family, at a family reunion.Enid married 'Jack' Clarke and had two sons, Paul and John. She was involved in all aspects of Carbrooke throughout her life, attending the village school, and church, and being involved with the social life in Carbrooke. She was a talented artist, and had several pieces of work displayed in London galleries. She specialised in miniatures, and some of us have the honour of owning one, as they were donated as raffle prizes for village events.Enid had a great pride in her village, and was a wealth of information, for the heritage group, often lending photos and items for our archives.She will be greatly missed, and we send our condolences to her family and friends.
at September 28, 2020 No comments: 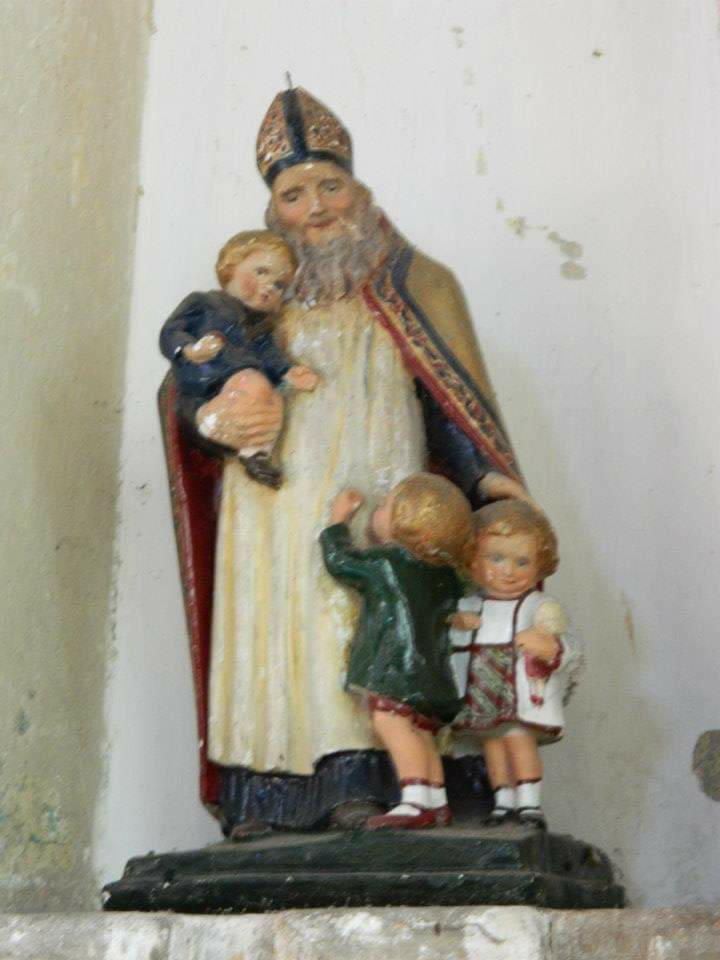 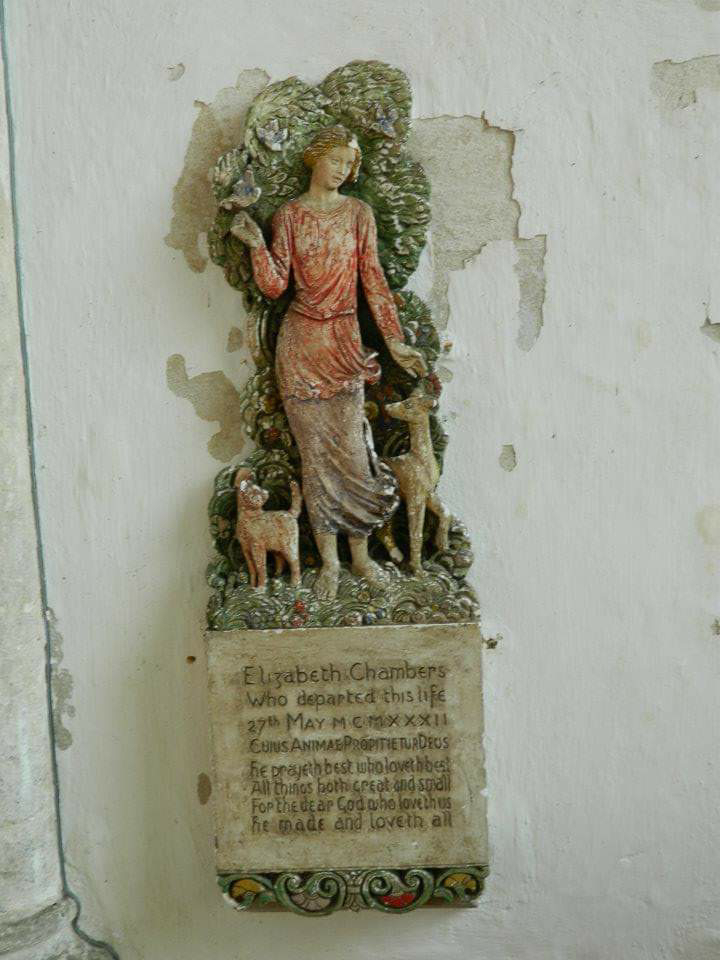 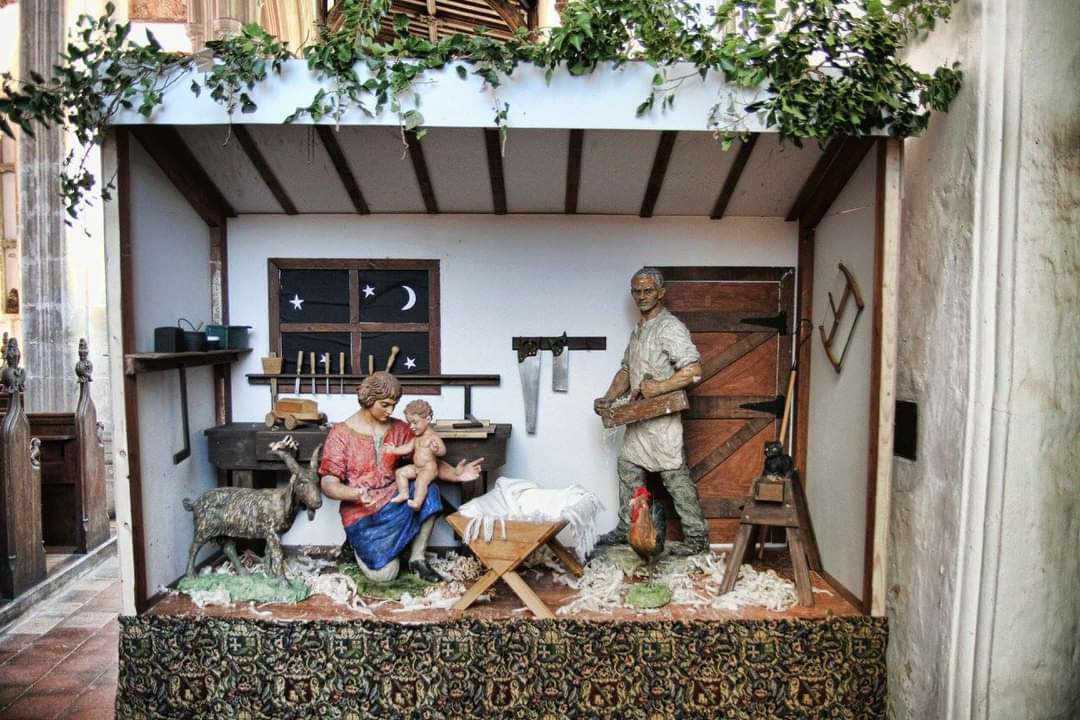 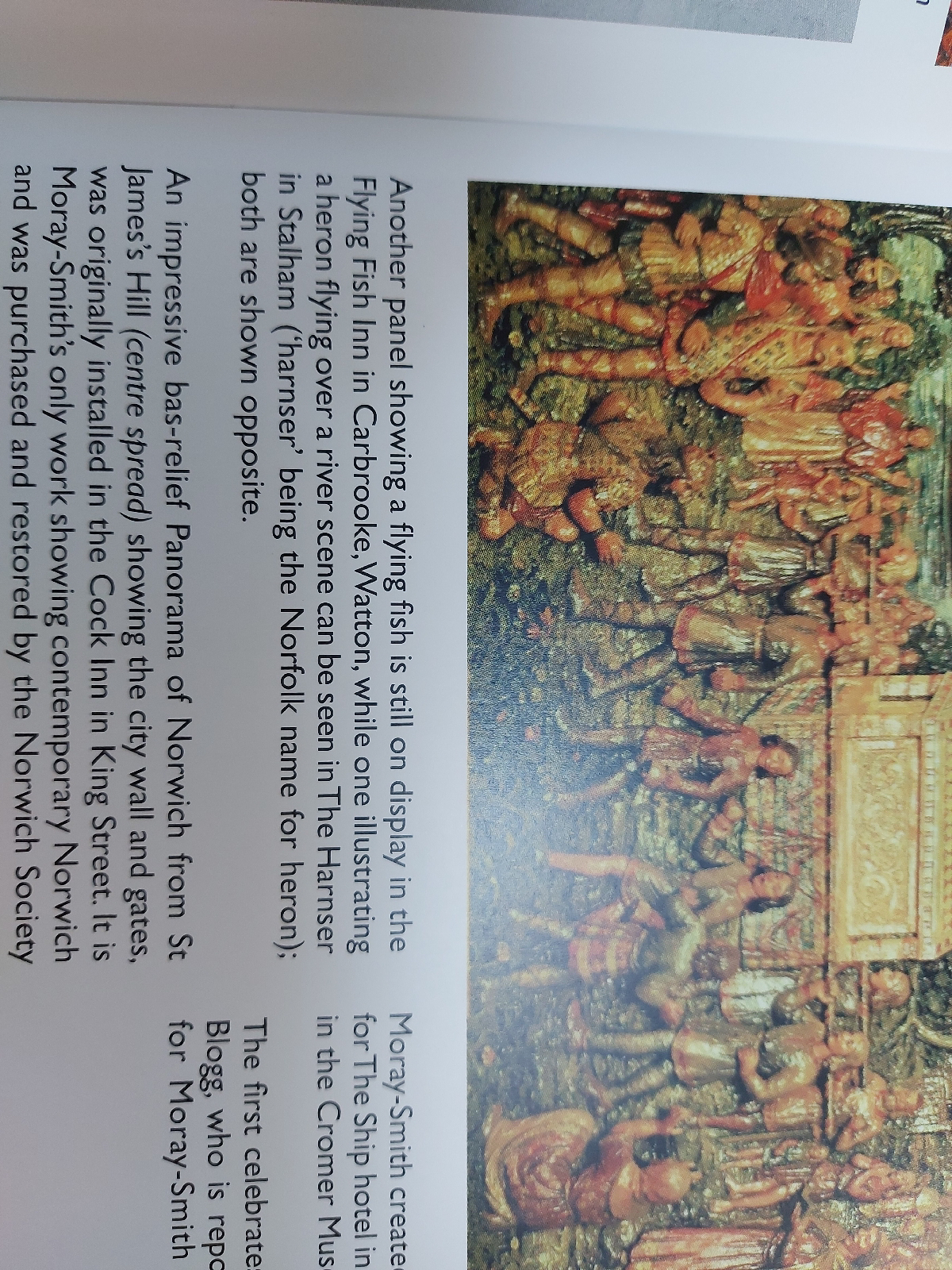 I am looking forward to reading this new purchase, which I discovered  whilst doing a Google search for the eccentric artists who were friends of Revd George Chambers, and stayed at Carbrooke  Vicarage for a while during 1920/30's. We have a number of pieces by them in the church, including our Nativity figures. I didn't realise how much work they did in Norfolk, especially mural panels that are dotted around the city.
There is also a panel of theirs in the 'The Flying Fish' Pub, Carbrooke. http://www.citybookshopnorwich.co.uk/product/4459/John-Moray-Smith--The-eccentric-Norwich-artist-who-brought-individuality-to-our-pubs-with-extraordinary-panels-showing-local-scenes-through-the-ages-Paul-Burall 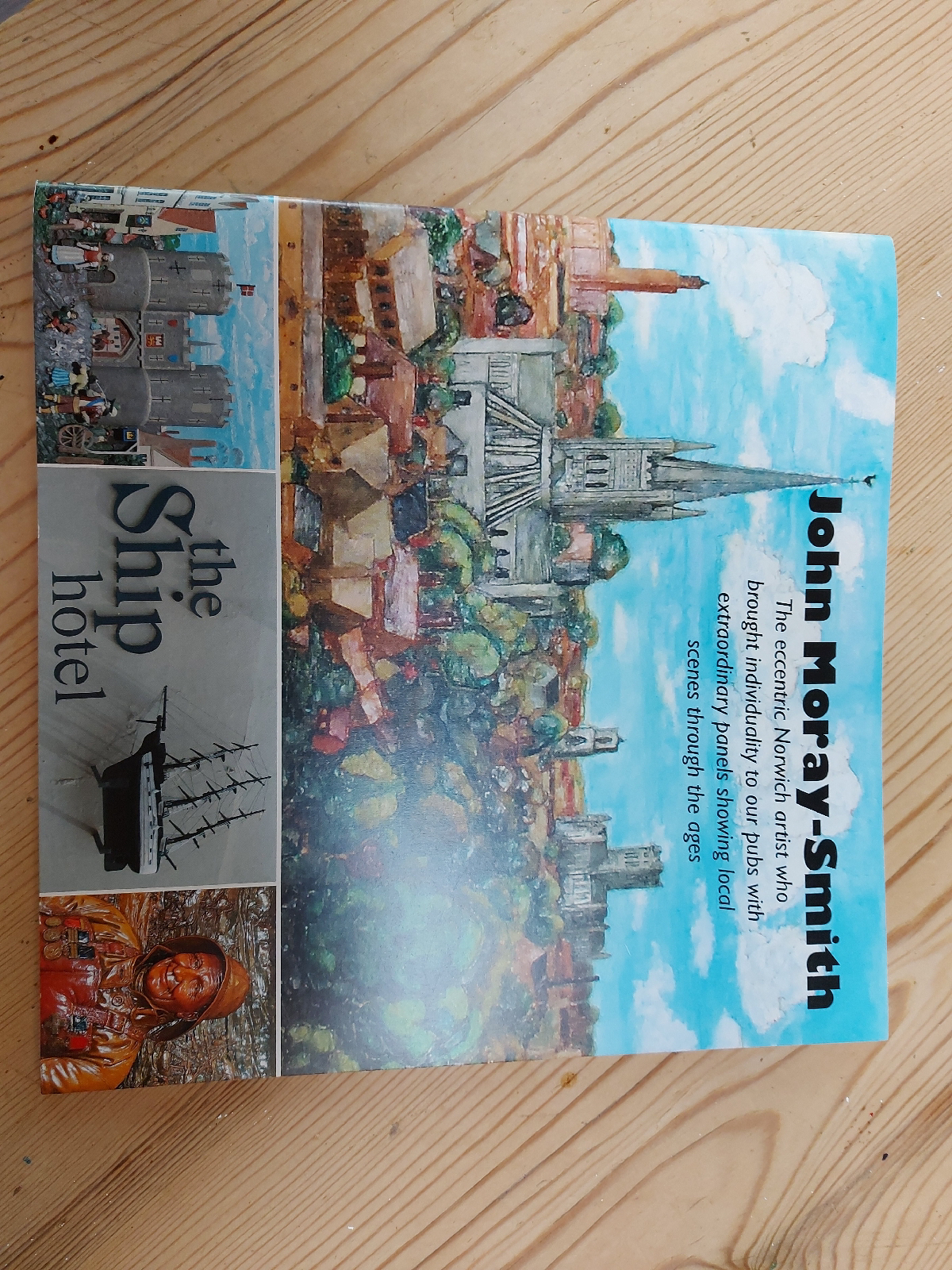 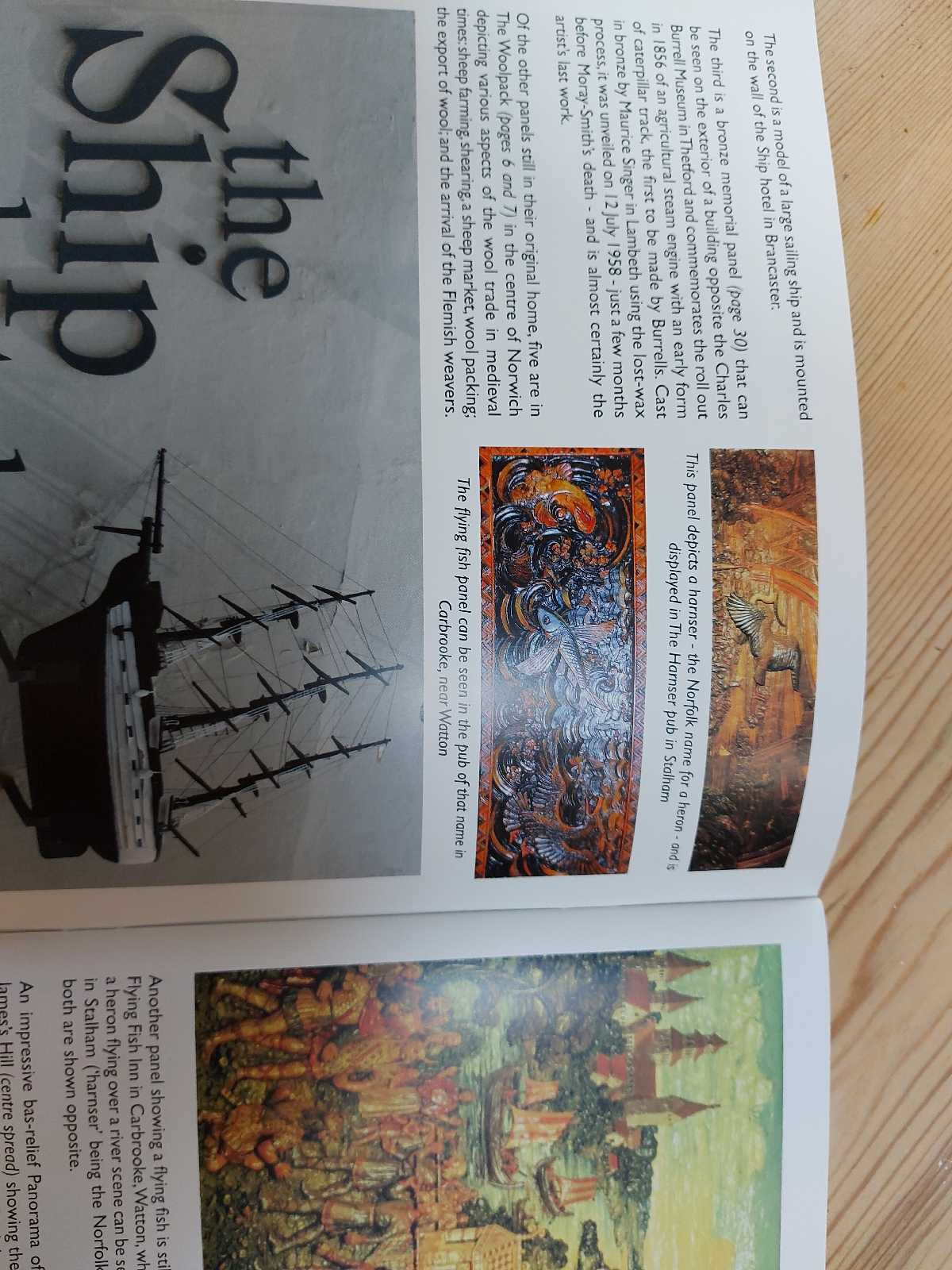 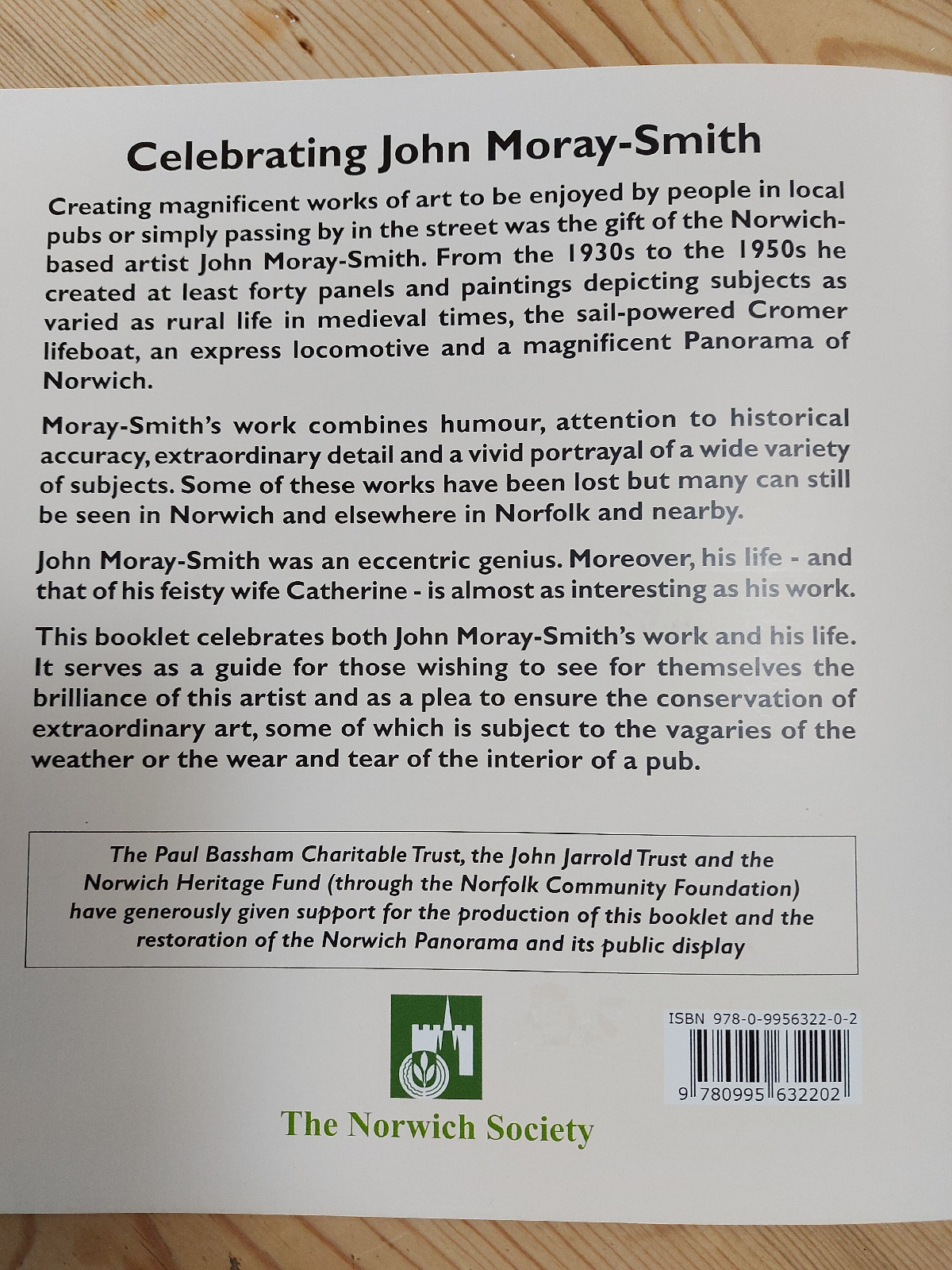 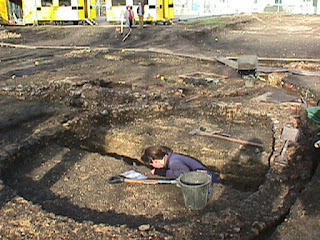 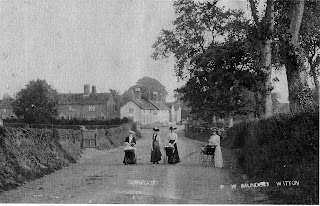 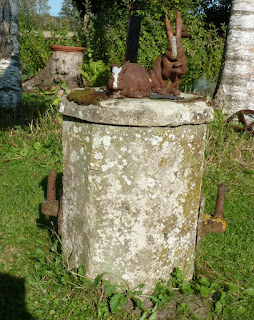 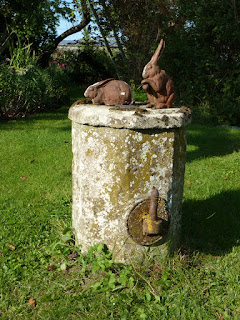 It is great when bits of Carbrooke Heritage are rescued and reused as would have been in the past. For example the old church at Carbrooke Parva (Caudle Springs ) was pulled down and the materials used to extend our church in the village. When the Commanderie was dissolved, the materials were used to build or renovate other structures in the village.
Roger Weston tells how he rescued the old school gate posts;
This was rescued by me over twenty years ago, when the spoils from excavations in the school playground were removed and dumped in a local rubbish pit. I realised this section of masonry was too good to be buried and lost so I recovered it and it has been a central feature in our garden.
You probably have a copy of the old sepia postcard showing mothers waiting for the children to come out of school, if so you will see the gates had three masonry pillars and this section of the gates is from the central pillar having a hinge pin on two opposite sides.
I often wonder if other remnants of that impressive portal were saved by any other Carbrooke residents and like ours; hopefully are used as a garden feature or incorporated into some similar feature.
Roger has enclosed the photos of the post as a garden feature. Also the photo of the posts in situ outside the school early 1900's
at September 14, 2020 No comments:

Email ThisBlogThis!Share to TwitterShare to FacebookShare to Pinterest
Labels: Recycling

http://www.carbrookehistory.co.uk/FarmSaleCatalogues/Carbrooke%20Woodfarm%20advert%201823.pdf One of our Group members has found this newspaper cutting for the sale of (Wood Farm?) in Carbrooke 1823

These days, the Crimean war may not be a well known part of British history, although many of us may have heard of 'The charge of the Light Brigade', and of Florence Nightingale, a nurse in the Crimean War, who recognised the importance of cleanliness and kindness in military nursing, which was later introduced into general nursing. It is hard to know how much Carbrooke people would have known about the Crimean War in 1856, but this piece published in 'Norfolk Chronicles', details how they celebrated the ending of the war. (Thanks to DS, Carbrooke)

NORFOLK CHRONICLE, 5 July 1856
PEACE FESTIVITIES
The inhabitants of Carbrooke being desirous that the poor should not be forgotten on the restoration of peace, a liberal subscription was raised by the principal inhabitants of the parish, with a few of their friends, and Thursday, June 26th, being the day fixed for the occasion, early in the morning the bells, as usual, sent forth their merry praise[e], followed by the firing of guns at various intervals during the day. Preparations were going on in different parts of the village in erecting arches and a good display of flags and mottoes, whilst the flags of our brave allies floated in the breeze, and persons were busily engaged arranging tables for all. Preparations being ready by three o’clock, the poorer classes, who were to partake, began to arrive in family groups and family parties, and by the time they had taken their seats, the band struck up “O the Roast Beef of old England”, and at four o’clock 500 well ordered and neatly attired men, women and children were regaled with roast beef, plum-puddings and a bountiful supply of beer. Grace was appropriately chanted. After dinner the health of the Queen was proposed and drank with three times three hearty cheers, followed by other toasts. which were kindly responded to. The Watton band performed well the usual tunes on such occasions. The company sang “God save the Queen”, and “Rule Britannia”. The persons employed as carvers and waiters also sat down, in a commodious booth, to the same English fare. After dinner the rustic sports began with a donkey race, followed by boys and girls running for varius prizes, jumping in sacks and jingling matches, climbing the pole, and dancing. In the evening some good fireworks were displayed, which excited much delight, and the festivities concluded with a large bon-fire, which terminated a day of mirth and amusement to the inhabitants of Carbrooke and adjoining villages, from 2,000 to 3,000 persons being present.
at September 11, 2020 No comments:

Carbrooke Heritage Website,  is in the process of being updated.  There is lots of updated information. Please  take a look,  feedback welcome, especially if you have stories, photos or comments to add.
www.carbrookehistory.co.uk
at August 29, 2020 No comments:

There have been rumours of pieces from a suit of armour in Carbrooke for decades, with some residents claiming to have seen it, but in more recent years, it appeared to have been lost. However during the 2018 Heritage Festival in the church, whilst looking for something else, a member of the PCC found what she recognised as the missing armour. We were delighted to have rediscovered it.

It was sent to Norwich Museum, who also sent it to the Royal Armourer, as it was of such interest. It had been presumed to have been Medieval given Carbrookes links with Knights Hospitallers, but instead it was dated to the mid-late 1600s by Norwich Museum, which was very enthusiastic about such a rare find. The armour has been professionally conserved for the village by the museum at a cost of almost £2500.00
The village of Carbrooke has 13 pieces from a suit of Parish Armour dating from the English Civil War period (1642-1651).
What is Parish Armour?
Every village in England was required to send young men to fight in the Civil War, as Pikemen. These conscripts, clad only in leather jerkins, were ‘cannon fodder’ in the battles and had to fight mounted cavalry, who were armed with swords and other lethal weapons – and wore armour.
Those villages which could afford it thus purchased a suit of armour for their soldier, usually made by the local blacksmith. Hence the concept of “Parish Armour”; it remained the property of the parish.
Mike Botting, volunteered to make and donate a cabinet in which to display the armour; and to obtain sponsorship from local people and businesses to defray the cost of conservation. He also donated the model 'Knight' for display purposes.
Should you wish to make a donation towards the restoration of unique local artefact, please contact Mike, Donations of £200 will be acknowledged by a plaque on the cabinet itself, while smaller donations will be listed on a board adjacent to it.
Please make cheques payable to Carbrooke Heritage Group, or you can make BACS transfers to Carbrooke Heritage Group’s account at Lloyds Bank, sort code 30-92-88, account number 01300405. Please write “Parish Armour” on the back of your cheque, or in the “reference” box in your bank transfer. Any amount which you can afford would be greatly appreciated.
The Armour is on permanent display in the church, and can be viewed whenever the church is open, or by arrangement.gg 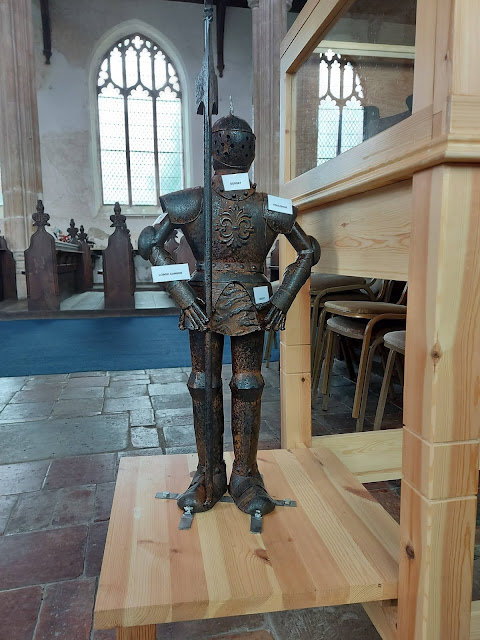 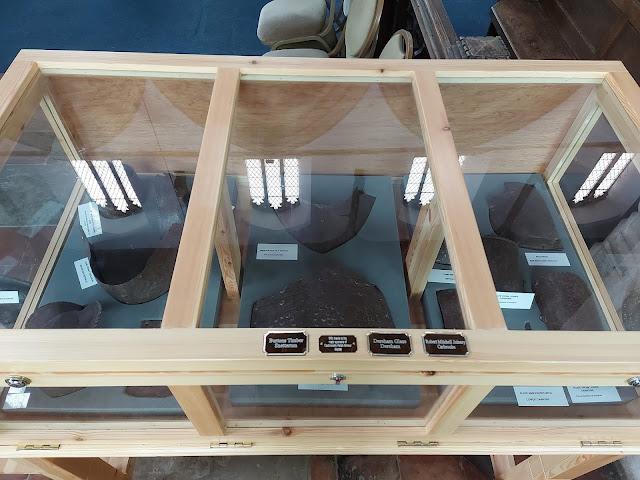 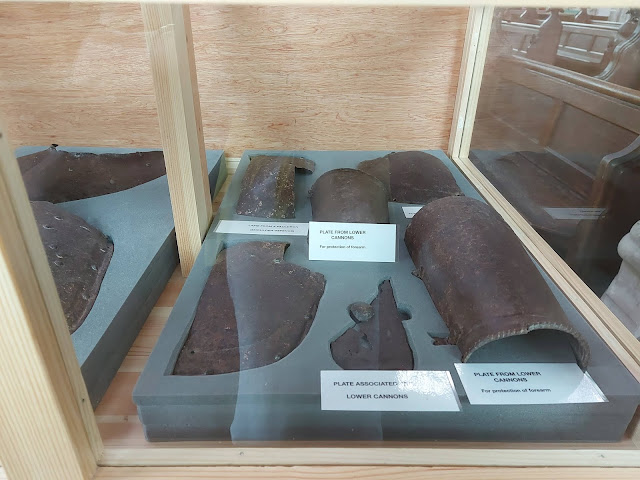 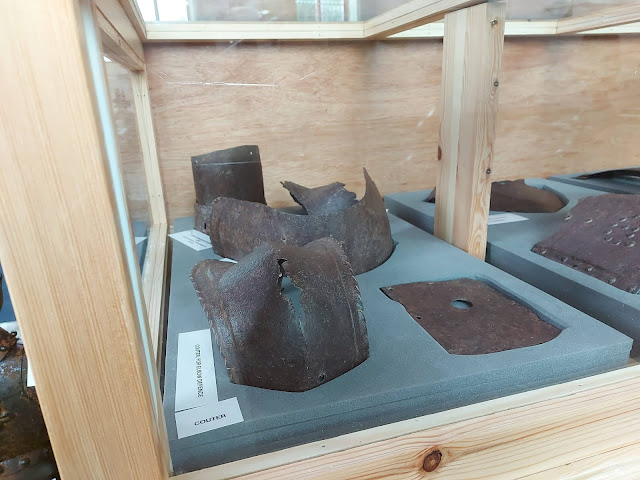 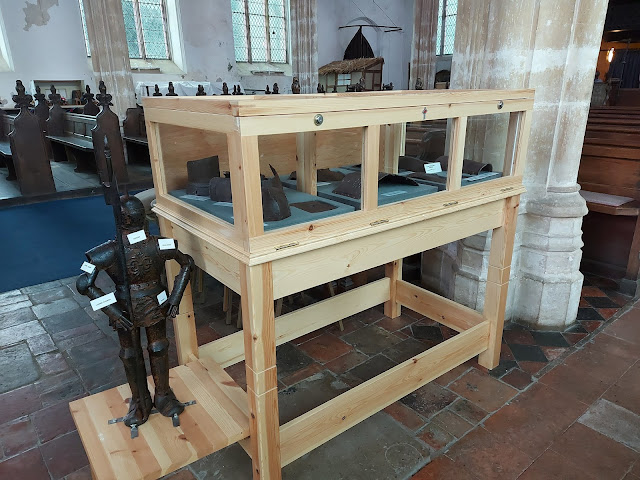 It is with sadness we hear of the death of Enid Clarke on Sunday 27th September 2020 , aged 100 years. Enid moved to Carbrooke at the age of...